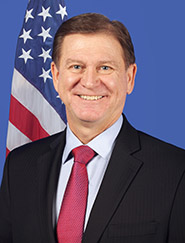 As the Federal Aviation Administration's Associate Administrator for Commercial Space Transportation, Mr. Monteith provides strategic leadership and direction to ensure the protection of public health and safety, safety of property, and the national security and foreign policy interests of the United States during commercial launch and reentry activities. He is also responsible for encouraging, facilitating and promoting the U.S. commercial space transportation enterprise.

Mr. Monteith was appointed to his current position on January 20, 2019, following his retirement from the United States Air Force in December 2018, as a Brigadier General, after serving 29 years. His last Air Force assignment was as the Commander of the 45th Space Wing and Director of the Eastern Range on the Space Coast in Florida. In these roles, he operated the world's busiest spaceport and led over 9,000 military, Department of Defense civilian and contractor personnel. During his three years at the 45th Space Wing, he oversaw the successful execution of 66 launches, 23 booster landings, and the successful operational use of autonomous flight safety systems. He was responsible for over $4B in infrastructure, an annual budget of over $400M and $93M in construction projects across three major installations. Immediately prior to that assignment, he served as the Senior Military Assistant to the Secretary of the Air Force.

Mr. Monteith previously served as the Assistant Deputy Under Secretary of the Air Force (Space) and as the Commander of the 50th Space Wing where he led more than 5,300 military, DoD civilian and contractor personnel serving at 14 operating locations worldwide in support of more than 170 communications, navigation, weather and surveillance satellites with their associated systems valued at more than $66 billion. His career also encompasses a variety of leadership positions to include Director, Navigation Warfare in the Office of the Secretary of Defense and on the Air Staff as Deputy Chief, Space Superiority Division. Finally, after beginning his career as a Peacekeeper Inter-Continental Ballistic Missile launch officer, he later commanded the Air Force's only space and missile training squadron.

Mr. Monteith holds a Bachelor of Science degree from the University of New Mexico, where he earned his commission as a Distinguished Graduate of their Reserve Officer Training Corps program. He also holds Master of Science degrees from Leslie University and the Dwight D. Eisenhower School for National Security and Resource Strategy.