Background
The commercial aviation system in the United States operates at an unprecedented level of safety. This safety record is due in part to the commitment of the Federal Aviation Administration (FAA) and aviation industry to share information to detect risks and address problems before accidents occur.

Our data-driven approach began in 1997 with the creation of the Commercial Aviation Safety Team (CAST). Since CAST’s inception, the fatality risk in commercial aviation has dropped 94 percent, resulting in the safest period in aviation history. CAST’s work, along with new aircraft, regulations, and other activities, has virtually eliminated the traditional common causes of commercial accidents – controlled flight into terrain, weather, and wind shear.

In 2010, CAST set a new goal: to reduce the remaining U.S. commercial fatality risk by another 50 percent by 2025. CAST is committed to sharing its knowledge and experience with other transportation modes and industries, and with international aviation safety organizations.

How CAST Works
CAST has evolved beyond the historic approach of examining past accident data to a proactive approach that focuses on detecting risk and implementing mitigation strategies before accidents or serious incidents occur.
CAST uses a disciplined, data driven approach to—

The voluntarily reported safety data in ASIAS comes from operators that represent 99 percent of U.S. air carrier operations. It provides CAST and the General Aviation Joint Steering Committee with insight into millions of operations.
Over the years, CAST had adopted more than 101 safety enhancements, with the last 22 based on information derived from ASIAS data. 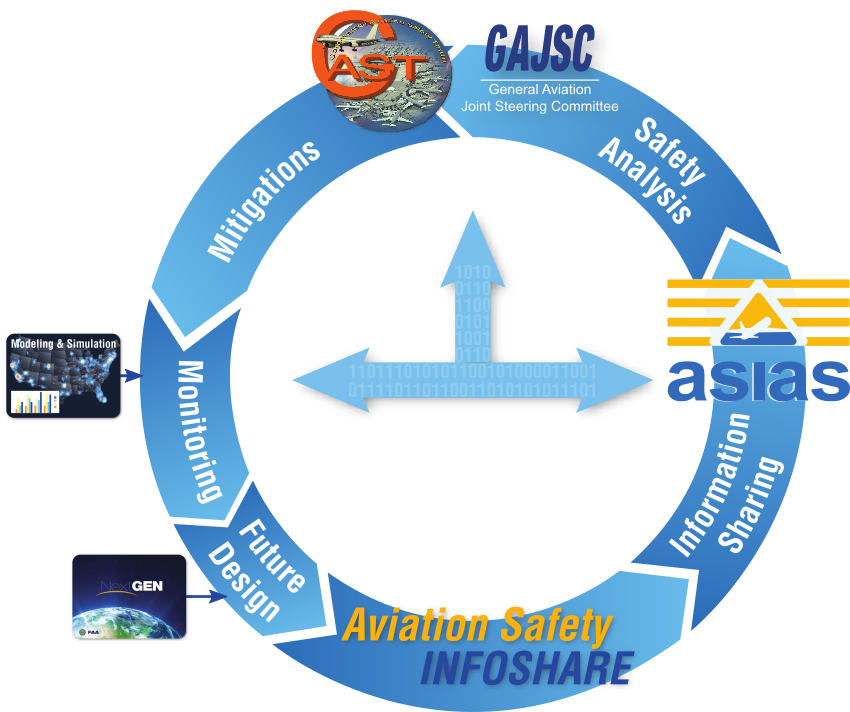 Joint Safety Analysis Teams (JSAT)
JSATs perform in-depth analysis of particular safety issues. A JSAT examines the sequence of events leading up to each studied event, and then identifies ways to mitigate potential precursors and contributing factors. The JSAT then evaluates the potential effectiveness of the mitigations.

Joint Safety Analysis and Implementation Teams (JSAIT)
JSAITs perform the work of both a JSAT and a JSIT, including in-depth analysis and evaluation, and developing action plans and recommendations.

Global Strategy
Although CAST focuses on operations in the U.S., it recognizes aviation is an international business and it encourages government and industry partnerships around the world.

Awards
CAST, in conjunction with ASIAS, received the 2018 Aviation Week Laureate Award for Commercial Safety in recognition of its contributions in advancing commercial aviation safety.

CAST received the prestigious 2008 Robert J. Collier Trophy and a 2006 Laurel Award from Aviation Week & Space Technology magazine in recognition of its contributions in reducing the fatality risk for U.S. commercial aviation by 83 percent from 1998 to 2008.