Drones or unmanned aircraft systems (UAS) are fundamentally changing aviation, and the FAA is committed to working to fully integrate drones into the National Airspace System (NAS). Safety and security are top priorities for the FAA and remote identification (remote ID) of drones is crucial to our integration efforts.

What is Remote ID?

Remote ID is the ability of a drone in flight to provide identification and location information that can be received by other parties.

Why Do We Need Remote ID?

Remote ID helps the FAA, law enforcement, and other federal agencies find the control station when a drone appears to be flying in an unsafe manner or where it is not allowed to fly. Remote ID also lays the foundation of the safety and security groundwork needed for more complex drone operations.

The final rule on remote ID will require most drones operating in US airspace to have remote ID capability. Remote ID will provide information about drones in flight, such as the identity, location, and altitude of the drone and its control station or take-off location. Authorized individuals from public safety organizations may request identity of the drone's owner from the FAA.

The FAA's Notice of Proposed Rulemaking (NPRM) on Remote Identification of Unmanned Aircraft Systems was published on December 31, 2019. The FAA received over 53,000 comments on the NPRM during the 60-day comment period following publication. The FAA reviewed all of the comments and considered them when writing the final rule. The final rule (PDF) was published in the Federal Register on January 15, 2021. Corrections made to the rule and published in the Federal Register on March 10, 2021 delayed the effective date to April 21, 2021.

There are three ways drone pilots can meet the identification requirements of the remote ID rule: 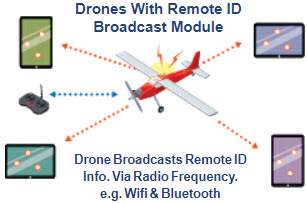 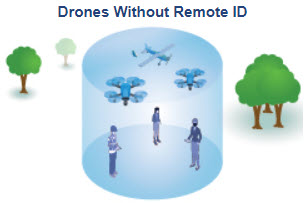 Following public comments and technical challenges, the FAA decided to eliminate the NPRM "Limited Remote Identification UAS" category to transmit remote ID messages through an internet connection to a third-party service provider remote ID UAS Service Supplier. This option has been replaced by the remote ID broadcast module option that allows for retrofit of existing drones.

Changes From the NPRM

In addition to elimination of the Limited Remote Identification UAS category and creation of the remote ID broadcast module, other changes from the NPRM to the final rule include:

Changes From the NPRM for FRIAS

Another set of changes from the NPRM applies to FRIAs. After the operational compliance date (September 16, 2023), FRIAs are the only locations where someone may fly an unmanned aircraft (drone or model airplane) without remote ID capability. The chart below provides some examples of changes from the NPRM to the final rule. For more information, visit the FRIA page.

Most of the final rule on remote identification becomes effective on April 21, 2021.

Next, there are compliance dates:

Which Drone Pilots Must Comply With the Rule?

All drone pilots required to register, including those who fly for fun, for business, or for public safety, must operate their drone in accordance with the final rule on remote ID beginning September 16, 2023, which gives drone owners sufficient time to upgrade their aircraft.

Another change from the NPRM concerns registration of drones. Under the NPRM, recreational drone pilots had to obtain a unique registration number for each of their aircraft.

What Information Will be Broadcast?

Whether using a Standard Remote ID Drone or a remote ID broadcast module, nearly all of the message elements are the same and they must be broadcast from take-off to shutdown.

A drone with a remote ID broadcast module must broadcast the following message elements:

Again, the deadline for operational compliance is September 16, 2023.