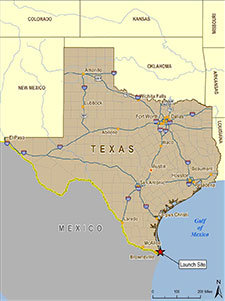 The Boca Chica Launch Site consists of a vertical launch area (VLA) and a launch and landing control center (LLCC). The VLA is approximately 2.2 miles north of the U.S./Mexico border and the LLCC is approximately 1.3 miles north of the U.S./Mexico border. The VLA is directly adjacent to the eastern terminus of State Highway 4, which provides the only access to the public Boca Chica Beach. The LLCC consists of a two-story building (referred to as Stargate) and is located west of the VLA along State Highway 4, adjacent to the SpaceX manufacturing and production area.