The FAA held a public webinar on the Neighborhood Environmental Survey and Noise Research Portfolio on February 22, 2021. View the webinar recording.

The FAA conducted a nationwide survey regarding annoyance related to aircraft noise. For detailed information on the survey, please review the survey introduction and read the survey report. Further information on FAA's aircraft noise research program, can also be found on a Federal Register notice published on January 13, 2021. This notice invited comments on the FAA's aircraft noise research program, including the survey, through a 90-day total period which closed on April 14, 2021. The FAA is currently reviewing the over 4,000 comments received to this docket (FAA-2021-0037-001).

As part of FAA's ongoing research program on aircraft noise, the Agency conducted a nationwide survey regarding annoyance related to aircraft noise. Below is an introduction to the survey and an overview of the methodology, results, and public comments requested.

Rationale for a New Survey 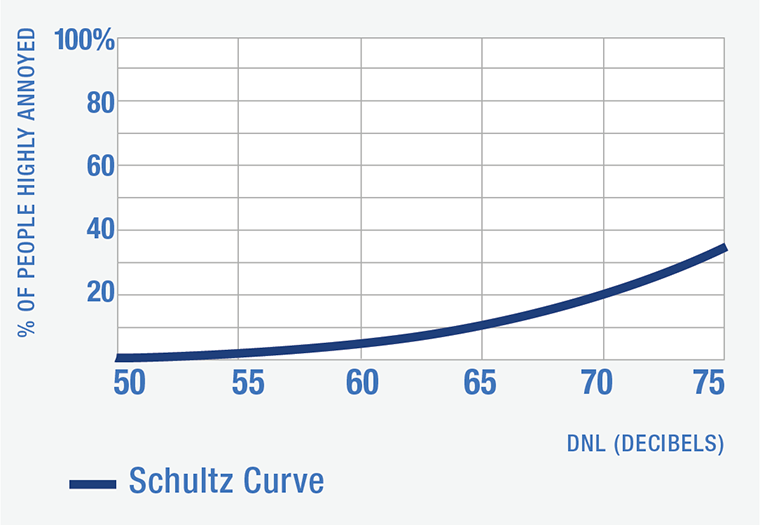 To ensure that FAA's continued efforts to reduce the effects of aircraft noise exposure on communities is based upon accurate information, FAA conducted a nationwide survey to measure the relationship between aircraft noise exposure and annoyance in communities near airports. This survey would capture the community response to a modern fleet of aircraft as they are being flown today and it would use best practices in terms of noise analysis and data collection. The responses from the survey have been used to create a new National Curve.

The Survey results show that there has been a substantial change in the public perception of aviation noise, relative to the Schultz Curve, and will ultimately inform future FAA noise initiatives.

FAA surveyed more than 10,000 residents living near 20 representative airports via a mailed questionnaire. The questionnaire was presented to the public as a Neighborhood Environmental Survey and asked the recipient if different environment concerns bother, disturb, or annoy them. Noise from aircraft was one of the thirteen environmental concerns that were covered in the Survey. Since the aircraft noise question was one of 13 environmental concerns listed, the recipient did not know this was in fact an airport community noise survey. The data from the Survey, the single largest survey of this type undertaken at one time, was used to calculate the new National Curve and provides a contemporary picture of response to aircraft noise exposure. A follow up phone survey was also offered to the 10,000 mail survey respondents, and just over 2,000 elected to participate. The phone survey was designed to provide additional insights on how the mail survey respondents feel about aircraft noise.

At the outset of the work, the FAA assembled a team of statisticians, survey experts and aircraft noise experts to determine the best methods for conducting the survey. The team decided to survey communities around a representative set of airports. A statistical approach was used to develop a set of airports that would be representative of the entire nation. A total of 95 airports met the initial criteria that ensured the selected airports would have a minimum number of jet aircraft operations and households exposed to noise: 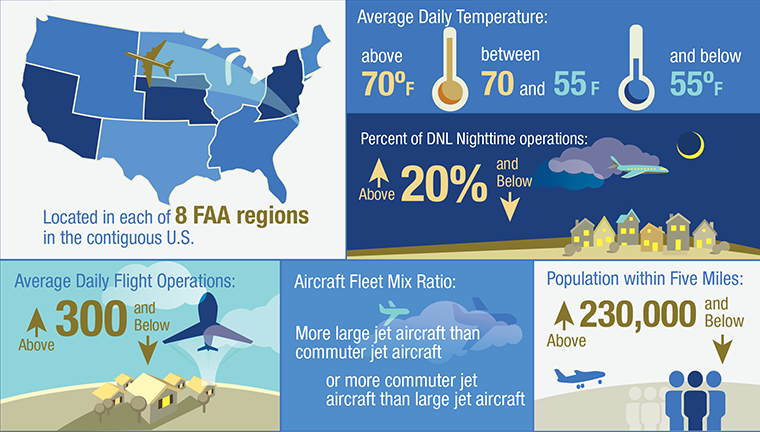 The U.S. Postal Service Computerized Delivery Sequence File (CDSF) was used to develop the addresses to which the Survey would be sent. The Survey was distributed to each selected household by the U.S. Postal Service (and via express mail in some cases) in six separate "waves" over a 12-month period starting in October 2015. English and Spanish versions were distributed to each household, along with a pre-paid $2 gift card as an incentive. The survey was sent to 40,000 households and over 10,000 people responded to the Survey by filling out the questionnaire and sending it back to the research team.

The survey questionnaire followed the recommendations of the leading international research organization on noise-induced effects on human beings. It included the key question: "Thinking about the last 12 months or so, when you are here at home, how much does each of the following bother, disturb, or annoy you?" For this question there were 13 different environmental topics, and survey respondents were asked to rate their annoyance on a scale from one to five (five being most annoyed).

Data from all this question was then analyzed, but with the focus placed on the responses to item "e" in the list, namely "Noise from Aircraft." This question is highlighted below for clarity, but all questions were presented equally in surveys issued to respondents.

Thinking about the last 12 months or so, when you are here at home, how much does each of the following bother, disturb, or annoy you?

Mail survey respondents were also invited to participate in a follow up phone survey. A $10 gift card was offered as an incentive and approximately two thousand respondents agreed to participate. The phone survey included a wide range of questions designed to provide further information about the reasons why respondents may be concerned about aircraft noise. While the results are insightful, it is important to note that the phone survey findings do not maintain the same statistical robustness as the primary mail survey.

Using the FAA's Integrated Noise Model (INM), DNL was computed twice for each airport. Note that although INM was replaced in 2015 by the FAA's Aviation Environmental Design Tool (AEDT), the noise modeling for the survey had begun prior to the release of AEDT and had been used to inform the selection the respondents. The use of INM was maintained for consistency throughout the project.

The second DNL computation for each of the 20 airports adjusted these inputs to reflect actual 2015 aircraft operations levels. This coincided with the Survey distribution. Updated noise levels were then paired with the Survey response data to create the National Curve.

When comparing the two curves, a variety of factors should be considered. Both analyses were conducted using the best survey data and understanding available at their time. However, many changes and advances have occurred in the 40 years since the Schultz Curve was created.

Potential factors for these differences still need to be explored; but to provide additional insight, mail survey respondents were also invited to participate in a detailed phone survey aimed at understanding the underlying reasons for annoyance to aircraft noise. The majority of phone survey respondents who were likely to be annoyed by aircraft noise indicated that they have experienced being "Startled", "Frightened", or "Awakened" by aircraft at home. Those who were bothered, disturbed, or annoyed by "General Traffic Noise" or "Smells" were also more likely to be annoyed by aircraft noise.

For additional information on the Survey, the FAA has prepared a detailed technical report.

For more information on the Neighborhood Environmental Survey findings and how to submit your comments, please see our Frequently Asked Questions (FAQs).

The FAA has issued a Federal Register Notice (FRN) to share the breadth of ongoing efforts at FAA on aircraft noise and to seek comment from the public. The FAA recognizes that a range of factors may be driving the increase in annoyance shown in the Neighborhood Environmental Survey results compared to earlier transportation noise annoyance surveys. Within the FRN, the FAA is requesting input on the factors that may be contributing to the increase in annoyance shown in the survey results. The FAA is also interested in hearing from the public on what, if any, additional investigation, analysis, or research should be undertaken to inform FAA noise policy.

Five possible factors are described below. "What other factors do you believe could be causing a change in response to aircraft noise?"

FAA wants to hear from you. What do you think about:

View the Federal Register first notice and read the comment extension notice, where you can provide your comments on the FAA's noise research program.