Today’s Virgin Galactic SpaceShipTwo flight from Spaceport America in New Mexico marks the 400th launch that the Federal Aviation Administration (FAA) has licensed. This achievement is made possible by the U.S. commercial space industry’s ingenuity and the FAA’s commitment to public safety.

The FAA works with operators to make sure they are meeting the requirements to conduct launches. This includes having FAA safety inspectors monitor all phases of licensed activities. The agency also works with the industry to safely and efficiently integrate commercial space operations in the National Airspace System.

There have been no fatalities, serious injuries or significant property damage to members of the public during any FAA-licensed launch. The FAA is committed to maintaining this safety record as the pace of commercial space operations quickens. 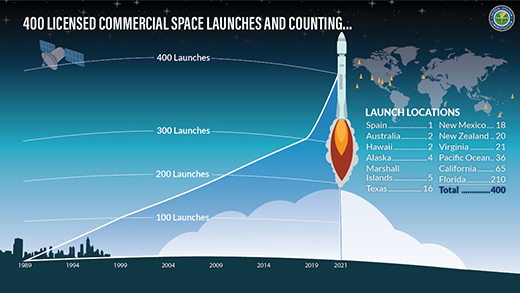 The number of FAA-licensed commercial space launches has dramatically accelerated from only one in 2011 to a record 39 in 2020. The growth is expected to continue as the industry looks towards space tourism in the coming years.

The first licensed launch occurred in New Mexico, when a Space Services Starfire launched from White Sands Missile Range in 1989.

The subsequent launches included suborbital and orbital flights and missions that delivered payloads to the Earth’s orbit and moon as well as interplanetary space. The missions had diverse goals such as carrying supplies and crew to the International Space Station, advancing scientific and medical research, and testing space capsules and rocket systems. They also involved deploying satellites for commercial use and for supporting the national interests of the United States.

The launches occurred in seven U.S. states, four foreign countries and the international waters of the Pacific Ocean. They were launched from traditional land-based sites, ocean platforms and while airborne using carrier aircraft.