ADS-B Out works by broadcasting information about an aircraft's GPS location, altitude, ground speed and other data to ground stations and other aircraft, once per second. Air traffic controllers and properly equipped aircraft can immediately receive this information. This offers more precise tracking of aircraft compared to radar technology, which sweeps for position information every 5 to 12 seconds.

Radio waves are limited to line of site meaning radar signals cannot travel long distances or penetrate mountains and other solid objects. ADS-B ground stations are smaller and more adaptable than radar towers and can be placed in locations not possible with radar. With ground stations in place throughout the country, even in hard to reach areas, ADS-B provides better visibility regardless of the terrain or other obstacles.

Aircraft operating in most controlled U.S. airspace must be equipped with ADS-B Out.

ADS-B In provides operators of properly equipped aircraft with weather and traffic position information delivered directly to the cockpit. ADS-B In-equipped aircraft have access to the graphical weather displays in the cockpit as well as text-based advisories, including Notices to Airmen and significant weather activity.

TIS-B is a client-based service that provides ADS-B Out/In equipped aircraft with surveillance information about aircraft that are not ADS-B equipped. To qualify as a TIS-B target, an aircraft must be equipped with a transponder, and be within radar coverage. 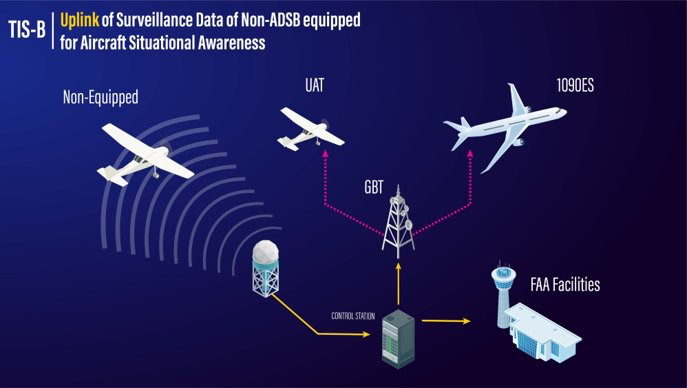 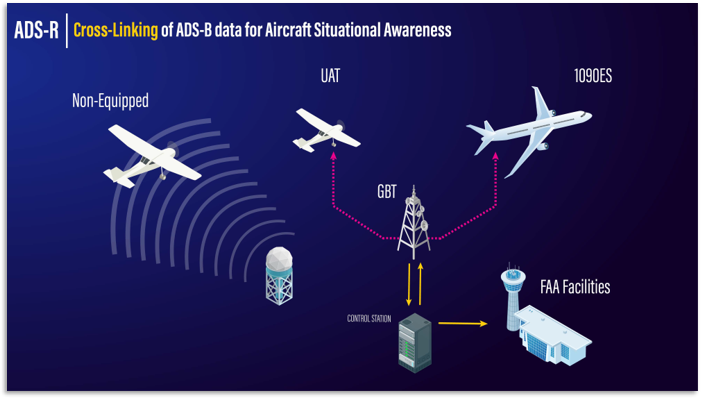 FIS-B provides the meteorological and aeronautical data to the cockpit. This service is not a client-based service, but rather is always broadcast into the airspace on the UAT frequency. This information is not broadcast on the 1090MHz frequency. 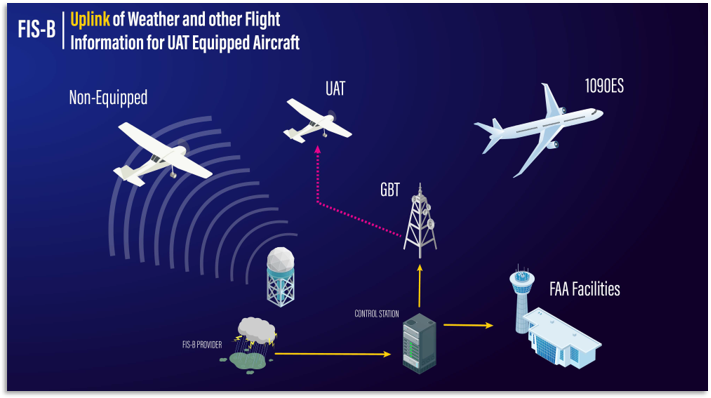 Some of the currently available FIS-B products are:

How do I receive ADS-B In Traffic Services and what do I see today?

Aircraft equipped with an ADS-B In only receiver are capable of receiving weather and proximate traffic. The most reliable traffic information that would be received is air-to-air via ADS-B. If an aircraft is not ADS-B Out equipped, the ADS-B ground stations will not identify the aircraft as a TIS-B/ADS-R client. If flying near a "client" aircraft, an aircraft without ADS-B Out may be able to receive the ADS-B traffic information specifically generated for the "client" aircraft.

In order to be considered a TIS-B/ADS-R "client" by the ADS-B ground stations, an aircraft must meet the following criteria:

However, as of January 4, 2016, the following additional criteria must be satisfied in order to be considered a TIS-B/ADS-R "client" by the ADS-B ground stations: Broadcast ADS-B with NACp>4, NACv>0, SDA>0, SIL>0, and NIC>4.

It is important to note that aircraft with dual link ADS-B-In capability (i.e. 1090MHz and 978MHz) are not provided with ADS-R services. This is because the aircraft is already capable of receiving ADS-B messages from both links directly via air-to-air. In this case, only TIS-B traffic services will be provided. Once the above criteria have been met, the ground system will identify the aircraft as a TIS-B/ADS-R "client" and using the client's ADS-B Out position information it creates a "hockey puck" around the aircraft. The "hockey puck" is 30 nm in diameter and +/- 3,500 ft.

The information that is received both air-to-air and ground-to-air by the ADS-B In receiver is for situational awareness use only.

Don't Overlook the Multiple Safety Benefits of ADS-B In

The "In" Thing in Aviation Safety: Making the Most of Your ADS-B System Solution