As a global leader, the FAA works with international organizations to promote aviation safety and efficiency for the worldwide alignment of technologies, policies, regulations, and standards. In collaboration with partners around the world, the FAA's work plays an essential role in resolving current challenges to global aviation and forging the future direction of the industry. 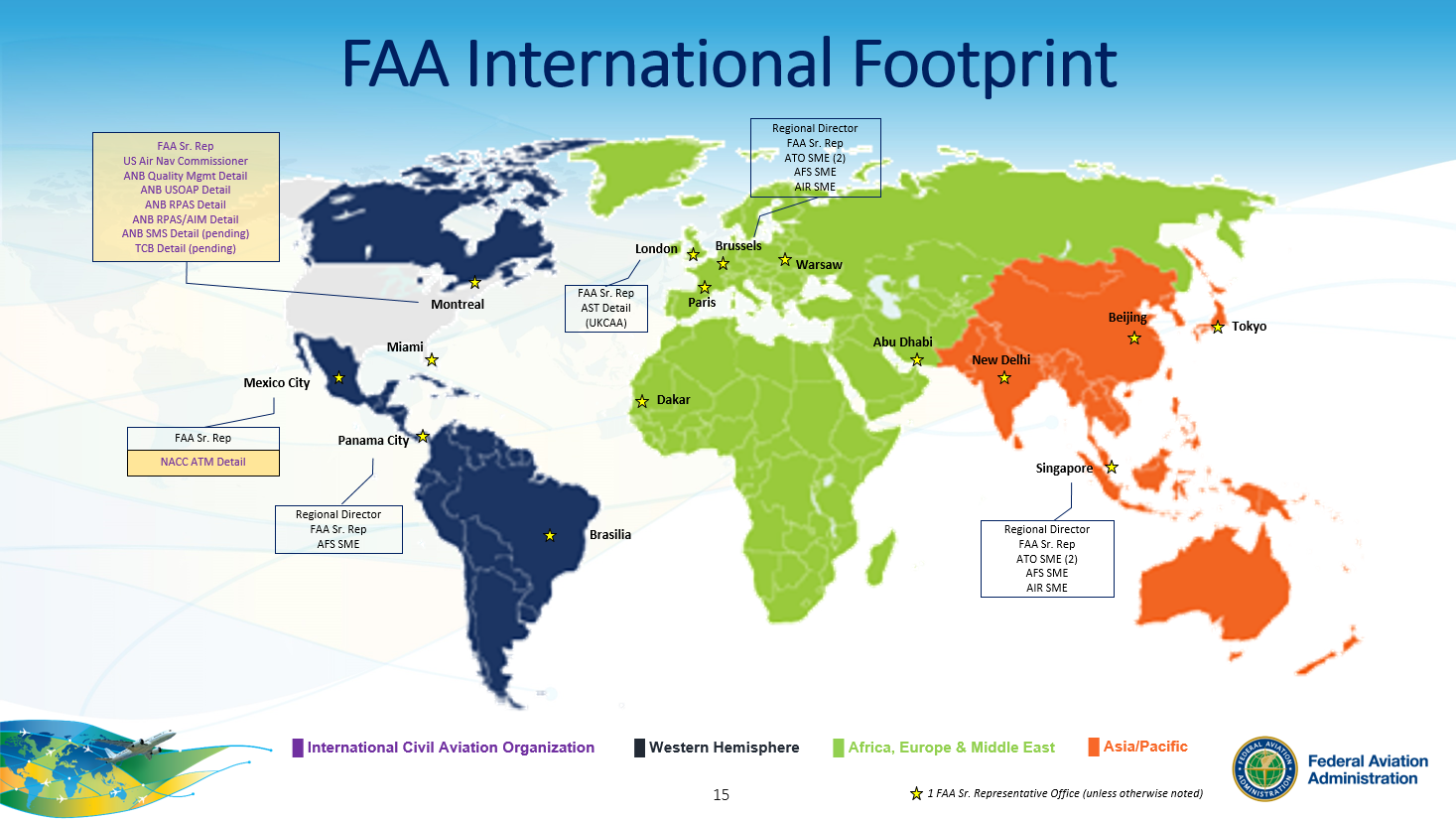 To learn more about how the FAA is engaging internationally to promote aviation safety and efficiency worldwide, visit the sections below.

The FAA engages internationally by collaborating with other U.S. Government agencies, U.S. industry, and international organizations to set international safety and efficiency standards and develop bilateral agreements for the exchange of aviation products, services, and information. The FAA collaborates with the International Civil Aviation Organization (ICAO) along with bilateral and regional international partners.

Click here to learn more about the FAA's role in the ICAO. 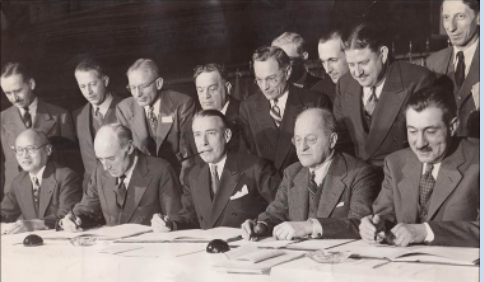 In partnership with international aviation counterparts, the FAA oversees air navigation and aviation infrastructure. The FAA issues approvals for aeronautical products and parts and works collaboratively with foreign civil aviation authorities to establish safety standards and provide oversight around the world.

As history has demonstrated, aviation’s potential rests on the public’s confidence in the safety of air transportation. Since 1958, the FAA has proudly served the U.S. as the principal steward of safety in the National Airspace System (NAS) and as a leader in promoting aviation safety abroad. The FAA’s continuing public service mission is to provide the safest, most efficient aerospace system in the world.

The FAA mission is to ensure the safety of the flying public does not end at the U.S. border or airspace boundaries.

Visit the sections below to learn more about how the FAA strives to be known globally as a resource for aviation safety expertise and as an innovator solving complex challenges and safely integrating new technologies.

Visit the Aviation Safety or Office of Airports pages for more information on how you may engage with international elements of FAA’s safety mission.

As the U.S. civil aviation authority and air navigation service provider, the FAA has a critical role in promoting safe and efficient operations within the aviation ecosystem. This includes cybersecurity. There is a diverse set of roles, responsibilities, technologies, and processes within this complex ecosystem, and the FAA works with partners internally and externally to identify and mitigate risks across the ecosystem so that risks, including those related to cybersecurity, do not negatively impact aviation safety and efficiency. For example, the FAA, representing the Department of Transportation (DOT), is a Tri Chair of the U.S. Aviation Cyber Initiative (ACI) along with the Tri Chairs from the Department of Homeland Security and the Department of Defense. The ACI’s mission is to reduce cybersecurity risks and improve cyber resilience to support safe, secure and efficient operations of the Nation’s Aviation Ecosystem. On the global stage, FAA is actively engaged with ICAO cybersecurity study/working groups and panels as well as standards development organizations. The FAA also pursues additional opportunities on a bilateral basis to identify potential collaborative activities at the intersection of cybersecurity and aviation safety and/or air traffic management efficiency.

The FAA has the primary U.S. government authority to protect U.S. civil aviation from potentially hazardous situations in domestic and international airspace. The FAA has broad oversight responsibilities for U.S. operators regardless of where they operate around the world and has developed procedures for identifying and responding to an international situation resulting from a conflict situation, heightened tensions, military or paramilitary action, and/or a weapons-related hazard in foreign or international airspace that may pose risk(s) to the safety of U.S. civil aviation operating therein.

The FAA assesses risks to U.S. civil aviation operating in and around conflict zones and coordinates FAA and appropriates U.S. Government approvals for any actions.

To review prohibitions, restrictions, and notices for current NOTAMs and links to the SFARs, click here.

The FAA is a global leader in assessing and mitigating aviation threats, such as from risks posed by conflict zones, through the Agency’s Chapter 31 Crisis Response Working Group (CRWG) to safeguard civil aviation. Employing a variety of tools and methodologies, FAA collaborates with U.S. interagency, foreign counterparts, and industry partners to mitigate risk and raise the international baseline of aviation safety and security, particularly for operations in/near conflict zones.

The FAA's CRWG is the agency’s cross-functional team of technical experts that is chaired by the Office of International Affairs (API). The success of the CRWG lies in the extensive involvement from FAA’s National Security Programs and Incident Response Division (AXE), Flight Standards (AFS), Air Traffic Organization (ATO), Office of Rulemaking (ARM), and Office of the Chief Counsel (AGC).

Together we assess risks to U.S. civil aviation operating in and around conflict zones and coordinate FAA and appropriate U.S. Government approvals for any actions.

To review prohibitions, restrictions, and notices for current NOTAMs and links to the SFARs, click here.

The FAA embraces the rapid growth and innovation occurring throughout the aviation and aerospace fields, enabling us to provide guidance to global stakeholders early and often to better manage in this rapidly changing environment.

As more transformative technologies with 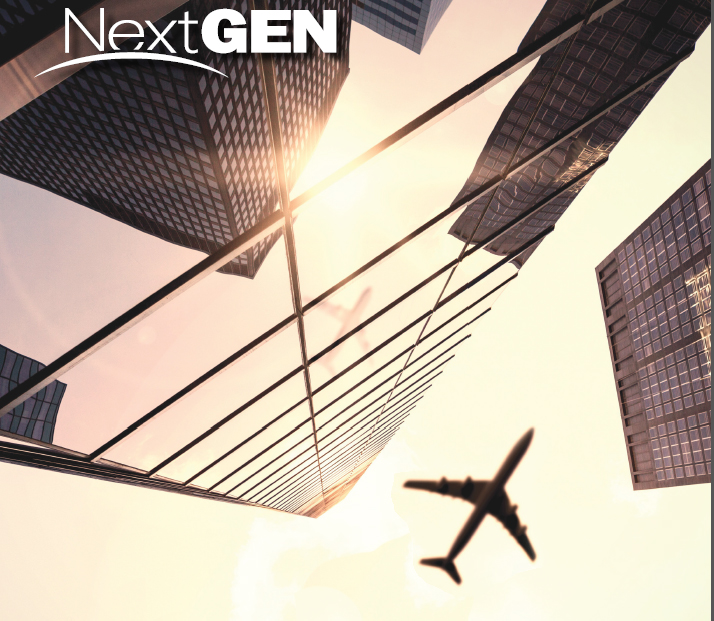 the potential to deliver safer, more efficient, and environmentally sustainable aviation operations become available, they must be integrated into the NAS and the complex and dynamic worldwide air transportation system. The FAA’s NextGen International Division works within the air traffic modernization community and with international partners to promote and harmonize programs, policies, and procedures to ensure global interoperability.

Integrating drones into the NAS requires new regulations, updates to existing regulations, and new policies and procedures to safely and securely accommodate drones. This is a rapidly changing sector that will continue to see immense changes over the next decade. To meet industry and public demand, the FAA follows an integration, not segregation, strategy based on risk. Low risk operations are integrated first, followed by increasingly complex and higher-risk operations.

The lowest risk operations are

recreational and commercial operations within Visual Line-of-Sight (VLOS). The higher risk operations are the commercial Beyond Visual Line-of-Sight (BVLOS) and cargo operations. The FAA has adopted an “Operations First” approach, which enables safe BVLOS and cargo operations in the near-term by allowing waivers and exemptions, as appropriate, from existing rules. Through the BEYOND Program, the FAA has partnered with various state, local, and tribal entities to focus efforts to resolve drone integration challenges. The FAA continues to further progress regulatory- and policy-related work to allow for routine BVLOS drone operations that are safe, scalable, economically viable and environmentally sustainable.

In addition, the FAA continues to develop the UAS Traffic Management (UTM) ecosystem. The UTM is envisioned as the ecosystem for uncontrolled operations that are separate from, but complementary to, the FAA’s Air Traffic Management (ATM) system. It is comprised of fundamental building blocks such as Remote Identification (RID), registration and the Low Altitude Authorization and Notification Capability (LAANC). UTM development will ultimately identify services, roles and responsibilities, information architecture, data exchange protocols, software functions, infrastructure, and performance requirements for enabling the management of low-altitude uncontrolled drone operations. UTM will not replace the ATM/Air Traffic Control (ATC) system covering controlled airspace. 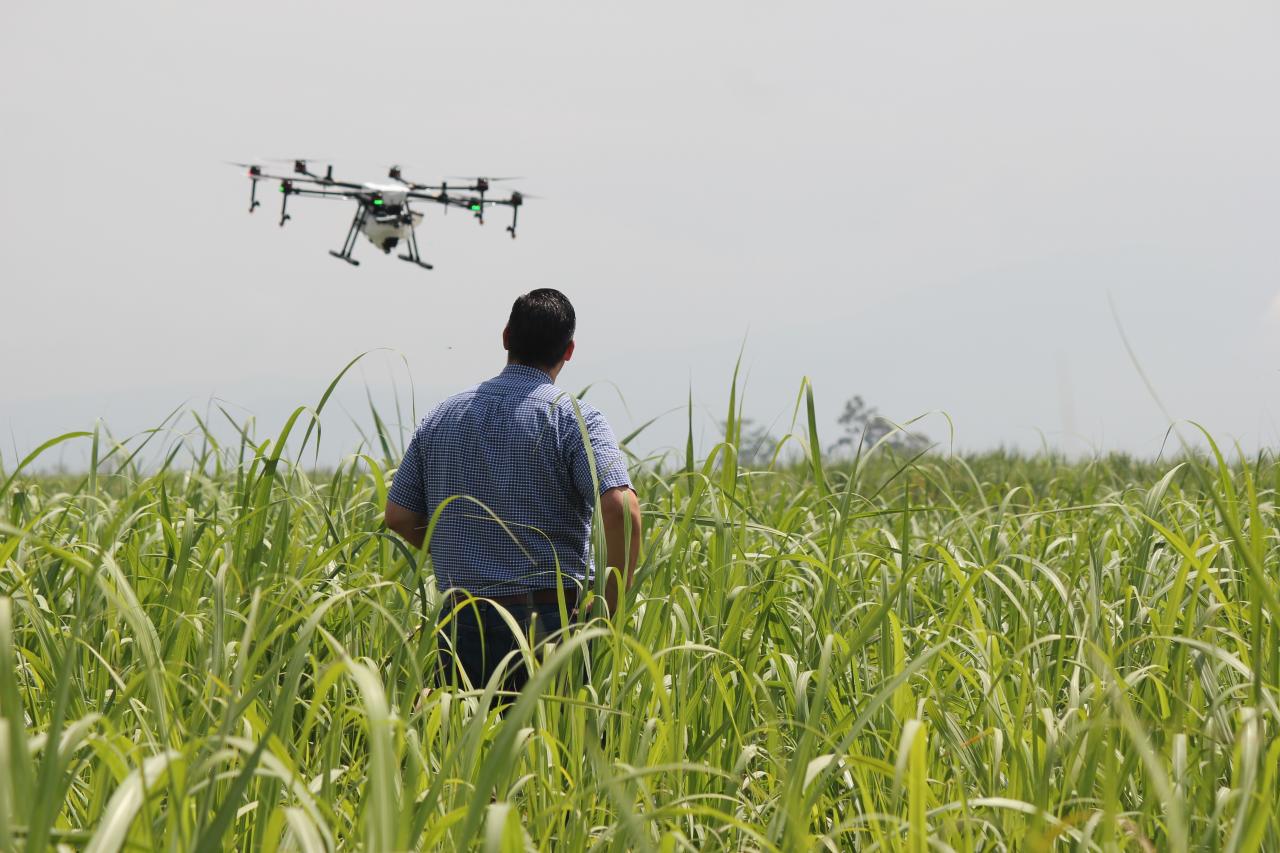 Advanced Air Mobility (AAM) is a rapidly-emerging, new sector of the aerospace industry, which aims to safely and efficiently integrate highly automated aircraft into the NAS. AAM is not a single technology, but rather a collection of new and emerging technologies being applied to the aviation ecosystem, particularly in new aircraft types. The AAM ecosystem also includes the framework for operations, access to airspace, infrastructure development, and community engagement. The FAA approaches AAM holistically as it’s not just about the aircraft, it's about everything necessary to support the operations. AAM captures a broad category of vertical takeoff and landing (VTOL) vehicles such as UAM vehicles, cargo delivery, and emergency rescue vehicles.

AAM has the potential to connect communities that were previously underserved by aviation. Additionally, sustainable electric aircraft may reduce emissions, noise, and fuel use, potentially creating a safer environment today and tomorrow. The FAA's goal is to work towards introducing these emerging technologies while maintaining the expected unwavering safety commitment.

UAM is a subset of AAM activities occurring in urban environments. The FAA envisions a safe and efficient aviation transportation system that will use highly automated aircraft to transport passengers and/or cargo within urban areas.

To learn more about this new era of aviation, the FAA's role in it, or information on certification and infrastructure, visit the FAA's Advanced Air Mobility page.

The FAA regularly collaborates on an enterprise-level with its international regulatory partners to work to support industry in its role as innovator. The FAA is actively engaged with international certification authorities to define and align the certification requirements for AAM and we are working across industry, government, CAAs and ANSPs across the globe on the certification and validation of new eVTOL vehicles. The FAA is already working with other CAAs to validate their eVTOL aircraft under development, and to develop a path for U.S. eVTOL aircraft to be validated by them. Aircraft type and propulsion type are just part of the certification progress. Operational considerations and rules pertaining to eVTOL including personnel licensing, operational certification, take-off and landing locations, aircraft design and equipage, aircraft wake classifications, ATM environment integration are all areas needing to be addressed in order to make AAM a reality. The success of this emerging, innovative and global industry depends heavily on collaborative partnerships and robust cross-authority communication in order to globally align and harmonize efforts and approaches.

U.S. law and FAA regulations can serve as a framework for other countries to consider as they develop their own regulation of commercial space launches, reentries and spaceports. In addition, U.S. launch or reentry operators conducting space activities internationally may have to comply with host country regulations and licensing. As a result, there is the possibility of dual licensing requirements. A common regulatory foundation can increase interoperability between countries and decrease the potential for unnecessary duplication.

Visit the FAA's Sustainability page or the Office of Environment and Energy website to learn more about what the FAA is doing to improve sustainability in the international aerospace system.

The FAA is committed to providing superior state-of-the-art training and outreach activities with advanced equipment and innovative delivery options on a wide range of subjects. This facilitates the delivery of aviation expertise and knowledge to aviation authorities and air navigation service providers around the world on critical functions for safety and efficiency. The FAA designs, develops, and delivers technical training for international aviation officials and also provides related training services such as assessments and consultations. Courses are available in Aviation Safety, Airway Facilities, Air Traffic, Airports, Aviation Security, Instructor Development, Management Development and Aviation English.